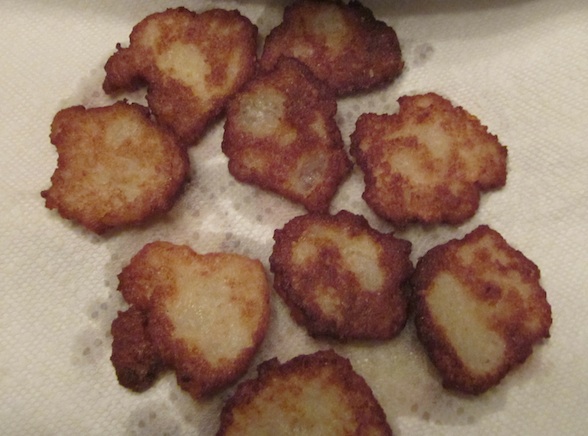 Allergen-free cooking has felt too frequently like one big compromise. Working without the magic of gluten or the sweet richness of butter means that “good enough” is often about as good as it gets.

This week, we had a first. Mr. Eos made his trademark potato latkes—the fried potato patties that are traditional at Chanukah—and he graciously made them allergen-free. The result was not simply “good enough,” not even merely “good.” The Eos family has decided, by a vote of three to zero, that allergen-free latkes are better than standard latkes.

There’s not much in latkes to begin with. Some potato, some onion. Throw in an egg or two, add a dash of matzoh meal. Salt, pepper, oil, fry, and there you go. We were all a little nervous about tinkering with so few ingredients.

But substituting flax seed for the egg and gluten-free flour for the matzoh meal produced latkes that were unusually light, delicate, and potato-y. Mr. Eos even let us talk him into making a second batch tonight, jut to be sure that the first go-round wasn’t a fluke.

Call it a Chanukah miracle. Call it anything you want. Just enjoy!